Eastern to Host Basketball Tournament in Honor of Alyssiah Wiley

Willimantic, CT (10/01/2019) — Eastern Connecticut State University will host a three-on-three basketball tournament on Oct. 9 in the Geissler Gymnasium from noon to 4:30 p.m. in honor of late Eastern student Alyssiah Wiley. There will also be other activities held in the Student Center such as a labyrinth, informational tables, games, a film showing and raffles. Connecticut State Rep. Robyn Porter and Wiley's mother, Corrinna Martin, will also speak on the issue of interpersonal relationship violence at the event.

Wiley, who was an Eastern sophomore in 2013, was in an abusive relationship with her boyfriend. When she decided to break things off with him, things took a turn for the worst and resulted in Wiley's murder. Wiley's death sent shockwaves throughout the entire state and Eastern's community, which prompted Eastern students to action. Eastern staff and students have taken initiative to bring awareness to interpersonal relationship violence, while honoring women like Wiley, who represent the necessity for awareness.

According to recent polls conducted by the National Domestic Violence Hotline, 43 percent of dating college women and 28 percent of college men say they have experienced violent and abusive dating behaviors. Women and men between the ages of 16 and 24 experience the highest rates of dating violence, which is triple the national average. 52 percent of college women also report knowing a friend who has experienced violent and abusive dating behaviors.

The coordinators of this event hope to raise further awareness of Wiley's story to get other college campuses throughout the country to host basketball tournaments and relationship violence awareness events like the one being hosted at Eastern. Their goal is to secure long-term sponsorships that will continue to recognize and bring awareness to dating, relationship and domestic violence. Eastern President Elsa Nunez to host this event annually.

To sign up and participate in the basketball tournament go to www.IMLEAGUES.com/EASTERNCT or email riccobonor@easternct.edu. Registrations will be open from Sept. 17 until Oct. 4. Students who attend the event will also have the chance to enter raffles, win gift cards and other electronics such as TV's. Staff and faculty are also welcomed to participate in the tournament.

Eastern Connecticut State University is the state of Connecticut's public liberal arts university, serving 5,200 students annually at its Willimantic campus and satellite locations. In addition to attracting students from 160 of Connecticut's 169 towns, Eastern also draws students from 29 other states and 20 other countries. A residential campus offering 41 majors and 65 minors, Eastern offers students a strong liberal art foundation grounded in an array of applied learning opportunities. Ranked among the top 30 public universities in the North Region by U.S. News and World Report in its 2019 Best College ratings, Eastern has also been awarded 'Green Campus' status by the Princeton Review nine years in a row. For more information, visit www.easternct.edu. 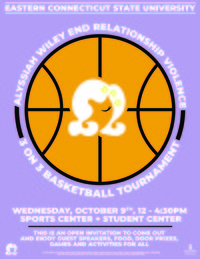