Willimantic, CT (02/13/2020) — The Eastern Connecticut Symphony Orchestra returns to Willimantic to perform a free concert on the Eastern Connecticut State University campus on Feb. 28 at 7:30 p.m. Held in the Concert Hall of Eastern's Fine Arts Instructional Center, the concert will feature works by Mozart and Beethoven, as well as pieces and performers from Turkey.

Throughout his career, Music Director and Conductor Toshiyuki Shimada has visited Turkey to conduct many of the country's leading orchestras. These collaborations have connected Shimada with some of the country's most gifted artists.

The Feb. 28 concert opens with the orchestra performing "Esintiler" (Inspirations), a work by one of Turkey's most beloved composers Ferit Tüzün. Soloists for the evening are Çagatay Akyol, harpist, and Bülent Evcil, flutist. The duo will also be featured on Wolfgang Amadeus Mozart's "Concerto for Harp and Flute." This is Mozart's only concerto for harp, and the pairing of flute and harp was seen as an unusual combination at the time.

Following intermission, Shimada and the orchestra perform Ludwig van Beethoven's Symphony No. 7, one of the composer's most popular works. Music from this symphony has been used in television shows and movies such as "Mr. Holland's Opus," "The King's Speech," "X-Men: Apocalypse," and "Cosmos." In Beethoven's time, the second movement was so well liked by the audience that it was encored at the work's debut in 1813.

This concert is generously sponsored by Eastern Connecticut State University, with additional funding provided by Hartford Healthcare. To reserve your free tickets, visit https://www.easternct.edu/ecso.html or call (860) 465-5123. Limit: 4 tickets per person. The address is 260 High St., Willimantic, CT 06226. Parking will be available in the Gelsi-Young and Library lots.

About the Eastern Connecticut Symphony Orchestra

This concert helps celebrate the connection between the Eastern Connecticut Symphony Orchestra and the Willimantic area. In 1954, what was then the New London Symphony merged with the Willimantic Symphony to form the Eastern Connecticut Symphony Orchestra. The ECSO performs additional concerts in Norwich at the Cathedral of St. Patrick and will perform a free concert there on April 5, 2020, at 7:30 pm.

Bülent Evcil is a Turkish solo flutist and the winner of the Royal Belguim Encouragement Medal of Art. Born in Istanbul in 1968, Evcil started his flute training at the State Conservatoire of Mimar Sinan University and graduated with the highest distinction in 1988. That same year, he continued his studies at the Brussels Royal Conservatoire, graduating in 1992 with the Diplome Superieur avec Grand Distinction for Flute, winning the Premiere Prix for chamber music. He received the Künstlerische Ausbildung (Efficiency in Art) degree with the highest distinction in 1996 at the Heidelberg - Mannheim Music Academy.

Evcil studied with flute virtuoso Sir James Galway, who described him as "one of the best flutists of his generation." He has worked as solo flutist in various symphony orchestras, including: Arturo Toscanini Philharmonic, Murcia State Symphony, São Paulo State Symphonie Orchestra, Istanbul State Opera and State Symphony, and Istanbul Borusan Philharmonic Orchestra. He has worked with such conductors as Lorin Maazel, Alexander Rahbari, Igor Oistrakh, and Emil Tabakov. Evcil released the albums Tango Zamani (Time for Tango, 2008) and Orta Dogu Minyatürleri (Middle Eastern Miniatures, 2012) on the Kalan Music label. He is also the solo flautist in Fazil Say's Mezopotamia Senfonisi (Mesopotamia Symphony, 2013). His last album, The Flute Virtuoso, was released in 2016.

He is currently the assistant principal flute of the Istanbul State Symphony Orchestra and solo flutist of the Borusan Istanbul Philharmonic. He performs in such diverse countries as Belgium, Germany, Austria, Italy, Hungary, Poland, USA, Ukraine, Switzerland, Brazil, and Turkey, and has taken part in the music festivals of Kraków, Bayreuth, Lemberg and Istanbul. Evcil seeks to expand the popularity of his instrument, and is proud to represent his music and his country on the international stage.

In 2006, Çagatay was invited to Felix Godefroid International Harp Competition as juror. Between 2008 and 2010 he performed as guest artist in the Mahler Chamber Orchestra. Three Turkish composers have dedicated their works to Çagatay: Nejat Basegmezler (Harp Concerto); Mahir Çetiz (Instant Dream for Solo Harp); and Hasan Tura (Trio for Harp, Flute & Viola).

He is an artist of the Kalan Music recording company and has recorded two albums: Lyric, Harp and Recorder, (November 2004); and Harp and Violin with Cihat Askin, (July 2009). In 2011, he participated in a EU Project called Hattushah based on Hittite music in Anatolia. He founded the duo Arpanatolia with Turkish musician Ferhat Erdem in May 2012. In the 2018-19 season, Çagatay was invited to perform in Canada, Russia, Bulgaria, Italy, Ukraine, USA, Japan, and Germany. He is currently the resident solo harpist of the PSO.

Eastern Connecticut State University is the state of Connecticut's public liberal arts university, serving 5,000 students annually at its Willimantic campus and satellite locations. In addition to attracting students from 162 of Connecticut's 169 towns, Eastern also draws students from 34 other states and 19 countries. A residential campus offering 41 majors and 65 minors, Eastern offers students a strong liberal art foundation grounded in an array of applied learning opportunities. Ranked among the top 30 public universities in the North Region by U.S. News and World Report in its 2019 Best Colleges ratings, Eastern has also been awarded 'Green Campus' status by the Princeton Review 10 years in a row. For more information, visit www.easternct.edu. 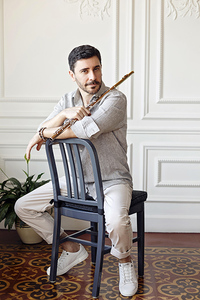 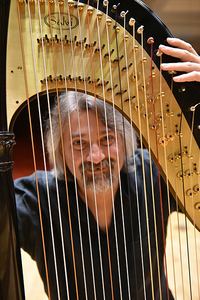